Tell a Swiss person that you visited the Appenzell on your vacation and you’re likely to receive at the least, a perplexed look. More likely though, a laugh followed by the question, “Why would you want to go there?” You see, the inhabitants of this region of the country are considered by the rest of Switzerland to be, well, a bit backward. The Swiss hicks, if you will.  Located near the Austrian border (right next to Heidiland – yes it really exists!), the Appenzell is an area whose main source of income is the dairy cows that produce milk primarily used for cheese. It is also known, though less so, for the excellent hiking. Hundreds of well-marked trails wind through the beautiful rolling green meadows that segue gently into stunning snow-capped mountains. Along the way can be found many a hutte (mountain hut), where a weary trekker can find a hot meal, cold beer, or even a bed for the night. Multi-day hikes can be taken on quite easily this way without the encumbrance of tents, stoves or even beer coolers (an accessory that most trekkers would usually only fantasize about having with them). We were hoping to take advantage of the huttes, even though we had rented an apartment in the Appenzell so our trip would only contain a series of day hikes. After all, knowing that there were Swiss rostis and sausages waiting for us down the trail, was quite a powerful incentive to keep moving.

Arriving in the village of Brülisau, where we would be staying for the week, we immediately saw signs of the provincial nature of the place. The town’s merchants all seemed to have one of only three or so names. There was the Dürig grocery store, the Dürig hardware store, etc. – you get the picture. Amusingly enough, the farmer who we were renting the apartment from was also named Dürig. This certainly seemed to be the kind of town that nobody ever moved away from. When we finally were able to locate the farm, we were greeted by Farmer Dürig and his five (!) daughters. This was our first encounter with real live Appenzellers, and it proved interesting. Here was Herr Dürig, in full typical farmer regalia with one notable exception: he had no shoes. Clearly, though, he had not been lounging in front of the TV when we arrived, as his feet were covered with a crusty brown that appeared to be a combination of dirt and manure. He was a cattle farmer so it wouldn’t have been surprising to us that he would be covered with the stuff, but we were having a hard time imaging a farmer slogging through the cow pastures barefoot. Over the days to come, though, we were going to have to get used to the idea that this, in fact, was the norm here. Much like the Hobbits in the famed Lord of the Rings series, the farmers of the Appenzell shun footwear and go about their daily work largely unshod. Add to this the physical appearance of many of these farmers – squat and hairy – and you could really believe that you had somehow slipped into the mythical world of J.R.R. Tolkein. Hopefully there would be no Orcs lurking by the trails.

The appearance of these farmers is just one of the factors that other Swiss find ‘backward’ about the Appenzellers. Another is the fact that, up until a few years ago, women in the region were not even allowed to vote. The patriarchs of the families would be responsible for representing the views of their entire clans. Clearly, change comes slowly here. Perhaps this helped contribute to Frau Dürig running away from her husband, leaving him to care for their 5 daughters.

Another strange feature of Apenzellerland is its flag. It consists of a big black bear sporting a red erect penis. A little unusual considering the traditionalism of everything else here, but as noted, it is an unusual place. The Apenzeller bear ‘logo’ did appear elsewhere in other variations where his privates were obscured by objects such as shields, etc. A little dose of Swiss morality, perhaps.

Finally there is the smell. When we were driving to our farmhouse accommodation for the first time, we were presented with many quaint farmhouses dotted across the rolling fields. We wondered why none of these houses seemed to have any porches or outside lounging areas in which to take in the beautiful scenery. When we had settled into our apartment and proceeded to open some windows we realized why: the smell was terrible! In addition to the cows, many of the farmers, including our Herr Dürig, kept pigs. Anyone who has been up close to a pigsty can vouch for the fact that some of them truly stink to high hell. These were of that variety. We quickly shut the windows and kept them that way for the entire week. We would have to be content with getting our fresh air out on the trails. We had always heard that, contrary to popular opinion, pigs were not only clean animals, but smart as well. The horrific smell led us to doubt the former claim, and our lone meeting with Herr Dürig’s porcine residents made us suspect of the latter. In each pen was a huge sow surrounded by 8-12 of her offspring. As we approached the pen to get a better look at them, panic ensued. Squealing, well, like pigs, they climbed furiously over each other in a desperate attempt to get away from us, though actually they were merely piling themselves up in a far corner of the pen. After about ten seconds of this they all suddenly stopped scrambling, and stared wide-eyed back at us, like little pink deer in the headlights. Then, as if choreographed, they all simultaneously began their desperate ‘escape’ attempt again. Ten seconds later, they stopped and stared again, only to return to their mad scramble a moment after. They repeated this cycle as long as we remained near them. We laughed at the ridiculous behavior, but wondered if their fear really was so stupid considering what their eventual fate would be.

Ultimately it was the combination of natural beauty and eccentricity that made our stay in the Apenzell so rewarding. The barefoot Hobbit-like farmers anally mowing their pastures to manicured perfection; The exceptionally cute big-eared dairy cows with enormous bells around their necks; Seemingly endless hiking trails winding through the alpine fields up towards jagged snow-capped peaks, then descending past placid lakes reflecting the crisp skies; Walking through the hot sun, exchanging greetings with the numerous Swiss hikers of all ages walking at seemingly breakneck speeds; and marveling at the scenery from the decks of huttes as we filled ourselves with hearty fare and  washed it down with excellent beer and cider.

Yes, it was a fine week, and we didn’t even see any Orcs. 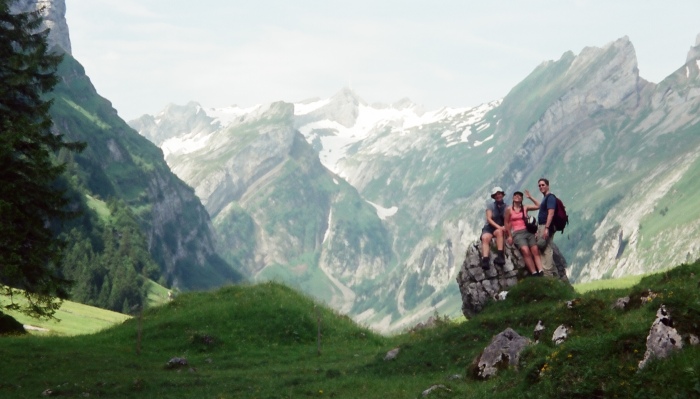